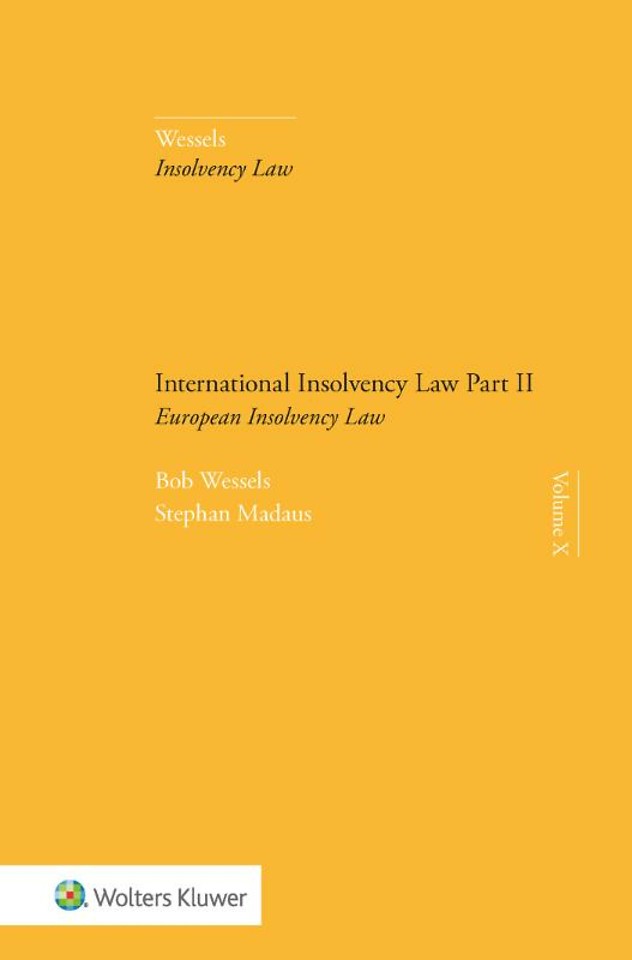 Bob Wessels is Professor Emeritus of International Insolvency Law at the University of Leiden (The Netherlands).

international Insolvency Law – Part II European Insolvency Law offers a crystal clear treatment on both fundamental and current matters in cross-border insolvency law. The book offers a thought-provoking read for specialists, while also serving as a friendly introduction to those new to the subject. A must-read for anyone in the field.

International Insolvency Law offers students, academics and practitioners an authoritative and practical guide on the European laws of international insolvency. It rigorously explores and clarifies the vast increasing body of legislative rules, case law, scholarly literature and other available sources. The fourth edition has been completely updated to cover recent developments in European Insolvency Law.
The book offers both depth and clarity, serving as a proper introduction and deeper exploration of the subject. International Insolvency Law has received critical acclaim from practitioners, judges and scholars alike. This is one of those reads no insolvency specialist and academic can do without.

Fourth edition of International Insolvency Law
This fourth edition now includes a detailed commentary of the recast of the Insolvency Regulation, which came into legal effect 26 June 2017. In addition to fundamental issues, the book covers over 300 contemporary court cases, exquisitely bringing the material to life. It includes cases related to Alitalia, Lehman Brothers, Nortel Network, Olympic Airlines and several cases on director’s liability and transaction avoidance cross-border decided by the Court of Justice of the European Union.

Met with critical acclaim
The previous edition of International Insolvency Law has received wide praise from judges and lawyers, as well as academics. The work is recognized for its clarity and rigorous analysis of the many issues, rules and concepts surrounding European insolvency law.
‘A magnificent book,’ says the Hon. Judge Samuel L. Bufford (Pennsylvania State University). Professor Jessica Schmidt (University of Bayreuth) called it a ‘marvelous work.’

Bob Wessels is Professor Emeritus of International Insolvency Law at the University of Leiden (The Netherlands). He held that chair from 2007-2014. He has been Professor of Commercial Law at the Vrije University Amsterdam from 1988-2008. He has over 40 years of experience as an independent legal counsel and arbitrator, provided expert evidence for cases in Belgium, Greece, Ireland, Poland, Sweden, Switzerland, UK and USA, and acted as consultant to the International Monetary Fund and the World Bank. From 1987-2016 he has been a Deputy Justice at the Court of Appeal (The Hague, The Netherlands). He is a Fellow of the American College of Bankruptcy, member of the American Law Institute and the European Law Institute, Honorary Member of INSOL Europe and Chairman of the Conference of European Restructuring and Insolvency Law (CERIL). Since 2010 he has been Expert Counsel to the European Commission in matters of restructuring and insolvency. Interviews Oude oplossingen populair in kredietcrisis naar aanleiding van het symposium 'De kredietcrisis: stand van zaken en wat staat er nog te gebeuren' van de Juridische PAO in Leiden.

Stephan Madaus is a Professor at Martin Luther University Halle-Wittenberg (Germany), where he teaches German, European and international insolvency law as well as contract and tort law. He is a member of the International Insolvency Institute and a Founding Member of the Executive of the Conference of European Restructuring and Insolvency Law (CERIL). In 2017 he was mandated (with two colleagues) by the German Ministry of Justice to evaluate the 2012 reform of the German Insolvency Code. He has published in prominent legal journals in Germany, Europe and beyond, including a treatise on the fundamental and doctrinal nature of rescue plans entitled Der Insolvenzplan.