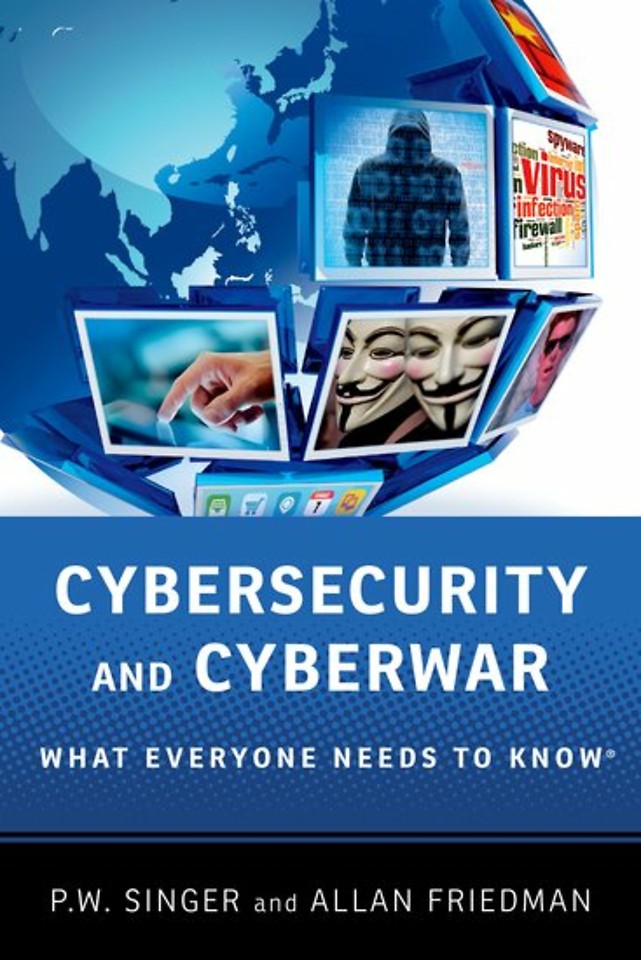 What Everyone Needs to Know

Dependence on computers has had a transformative effect on human society. Cybernetics is now woven into the core functions of virtually every basic institution, including our oldest ones. War is one such institution, and the digital revolution's impact on it has been profound.

The American military, which has no peer, is almost completely reliant on high-tech computer systems. Given the Internet's potential for full-spectrum surveillance and information disruption, the marshaling of computer networks represents the next stage of cyberwar. Indeed, it is upon us already. The recent Stuxnet episode, in which Israel fed a malignant computer virus into Iran's nuclear facilities, is one such example. Penetration into US government computer systems by Chinese hackers-presumably sponsored by the Chinese government-is another. Together, they point to a new era in the evolution of human conflict. In Cybersecurity: What Everyone Needs to Know, noted experts Peter W. Singer and Allan Friedman lay out how the revolution in military cybernetics occurred and explain where it is headed.

They begin with an explanation of what cyberspace is before moving on to discussions of how it can be exploited and why it is so hard to defend. Throughout, they discuss the latest developments in military and security technology. Singer and Friedman close with a discussion of how people and governments can protect themselves. In sum, Cybersecurity is the definitive account on the subject for the educated layman who wants to know more about the nature of war, conflict, and security in the twenty first century.

1. Why cyberspace is wonderful… and complicated
What is cyberspace?
Why do people talk about the difference of a networked world?
How does the Internet actually work?
Who owns this thing?
Wait… You mean no one runs the internet?
What can governments do online?
What are the limits of state power?
Just how dependent are we on cyberspace?

2. Security and Insecurity Online
What do we mean by a "secure " system?
What is the difference between an attack on a network and an attack on a system?
How does anti-virus software work?
How do you defend a network?
Why is anonymity a problem online? Why is it relatively easy to act without accountability?
How can you authenticate some one to be sure they are who they say they are?
How do we keep data secure in cyberspace?

3. Threats and Bad Actors
Differentiating threats
Value at risk
What are the bad guys after? What can you really do with a computer?
What's the worst you can do? Can a hacker really turn off the power grid?
Different motivations of attackers
Different types of attacks
What is Cyber Terrorism, actually?
What does "cyberwarfare" mean?
How are countries militarizing cyberspace? Why?
So if we just built better systems, could we have a secure internet?

5. Why securing cyberspace is hard
What are some mechanisms that enable us to trust systems or data?
What is the difference between espionage and exploitation?
Why not just write better software?
Why can't network operators detect bad behavior?
Why security through obscurity doesn't work
How do we know what has happened after a cyber incident?
How does the rise in "cloud computing " change the dynamics of cyber security?
What makes mobile computing different?
If everyone's systems are vulnerable, can't defenders just interrupt the attacker's systems?
Why is it so hard to know who the attackers are?
Why does attribution matter?
How do we measure a cyber risk?
Why aren't users able to protect themselves?
Don't vendors and service providers have enough incentives to provide good security?
Why aren't companies investing enough to protect themselves?

7.The path forward to a more secure cyberspace
It sounds like every aspect of modern life is vulnerable. Are things really that bad?
Why can't we just re-built the technology to prevent bad behavior?
Can we impose accountability through national control of cyberspace?
How can private firms be incentivized to internalize their risk?
If a company or government agency was willing to invest in cyber security defenses, what would stand in their way?
Can internet service providers do more to identity and stop bad behavior?
How can we make it harder for bad actors to profit from successful attacks
What can I do to protect myself?