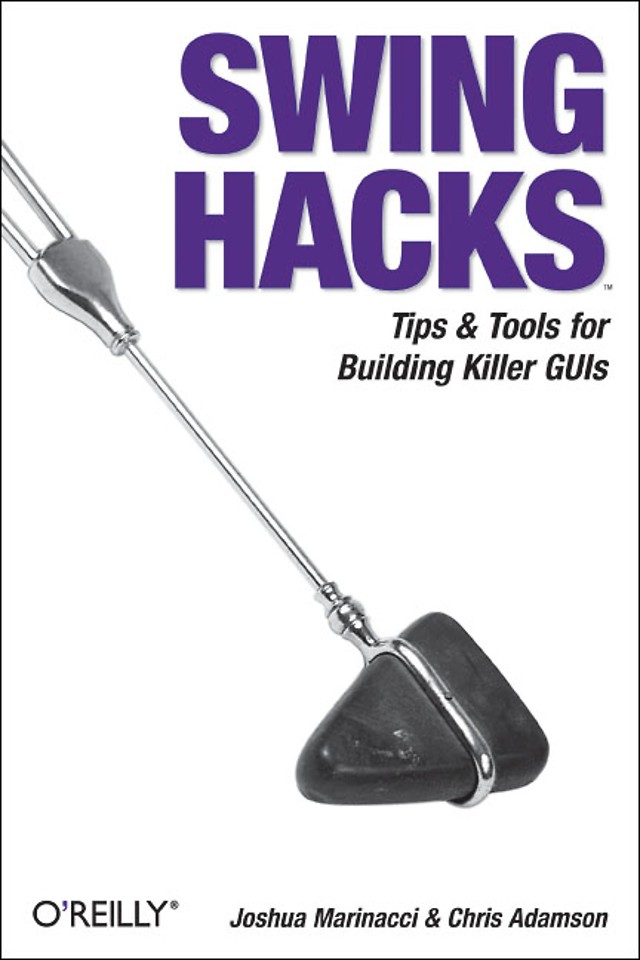 Joshua Marinacci first tried Java in 1995 at the request of his favorite TA and never looked back.

'Swing Hacks' helps Java developers move beyond the basics of Swing, the graphical user interface (GUI) standard since Java 2. If you're a Java developer looking to build enterprise applications with a first-class look and feel, Swing is definitely one skill you need to master. This latest title from O'Reilly is a reference to the cool stuff in Swing. It's about the interesting things you learn over the years-creative, original, even weird hacks-the things that make you say, 'I didn't know you could even do that with Swing!'

'Swing Hacks' will show you how to do fun things that will directly enhance your own applications. Some are visual enhancements to make your software look better. Some are functional improvements to make your software do something it couldn't do before. Some are even just plain silly, in print only to prove it could be done. The book will also give you give you a small glimpse of the applications coming in the future. New technology is streaming into the Java community at a blistering rate, and it gives application developers a whole new set of blocks to play with.

With its profusion of tips and tricks, 'Swing Hacks' isn't just for the developer who wants to build a better user interface. It's also ideally suited for client-side Java developers who want to deliver polished applications, enthusiasts who want to push Java client application boundaries, and coders who want to bring powerful techniques to their own applications.

Whatever your programming needs, 'Swing Hacks' is packed with programming lessons that increase your competency with interface-building tools.

Joshua Marinacci first tried Java in 1995 at the request of his favorite TA and never looked back. He has spent the last ten years writing Java user interfaces for wireless, web, and desktop platforms. After tiring of web programming with several large companies in the Atlanta area he joined Sun to work on Java user interfaces full-time, first on the Swing team, then NetBeans, and now on the JavaFX tools team. Joshua recently co-authored O'Reilly's Swing Hacks with Chris Adamson. He also contributes to SwingLabs and writes regularly for Java.net. Joshua holds a BS in Computer Science from Georgia Tech and recently moved to Eugene, Oregon to be with his new wife.