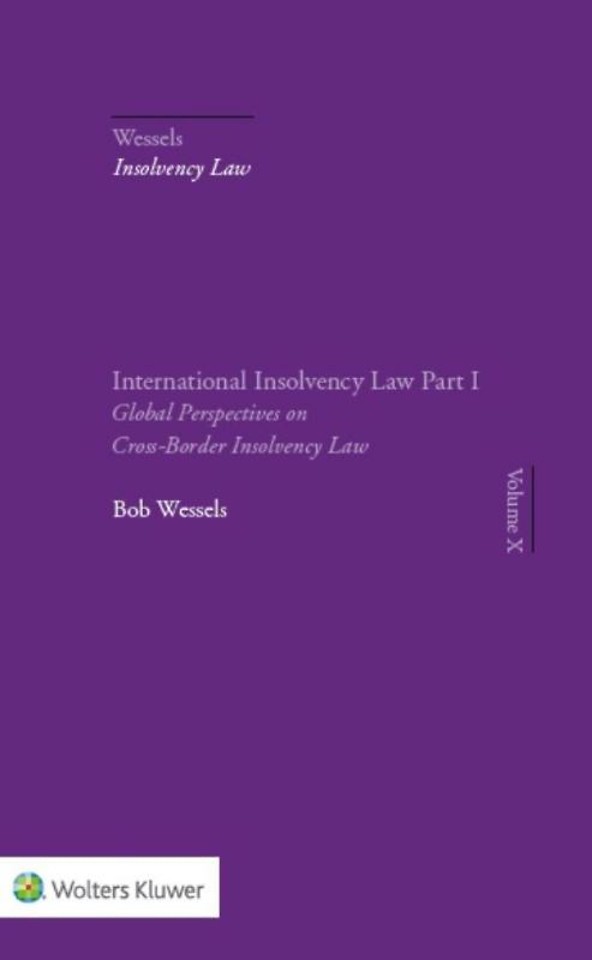 Bob Wessels is Professor Emeritus of International Insolvency Law at the University of Leiden (The Netherlands).

Wessels 'International Insolvency Law Part I - Global Perspectives on Cross-Border Insolvency Law' aims to be a first port of call on any question on international insolvency law for specialists (such as practitioners, judges and scholars), but also for those who are rather new to the subject, including legislators and students.

Chapter I starts with a detailed account of topics which nearly always emerge from cross-border insolvency cases and continues the debate on principles and new dogmatic and pragmatic approaches to issues and disputes on international insolvency law, including several remarkable court decisions. Regional conventions (in Latin-America, the Nordic European countries, the OHADA Treaty in Central Africa) have been explained and several of the ‘soft law’ sources have been described. These include best practice rules from organizations such as INSOL International and UNCITRAL’s Legislative Guide on Insolvency Law, including its recommendations for the treatment of corporate groups, and the use of Protocols or cross-border insolvency agreements.

In Chapter II the status of international insolvency law in the Netherlands has been updated. Despite the EU Insolvency Regulation being applicable to intra-community cases since May 2002, Articles 203-205 of the Dutch Bankruptcy Act remain relevant for cross-border cases with third-(non-EU)countries as will the general application by courts in the Netherlands of private international law, as demonstrated in cross-border legal disputes related to the insolvent Russian corporate giant Yukos Oil Company having shares in a company, incorporated in the Netherlands, which holds large assets in several countries.

In Chapter III in this third edition the main topic is the UNCITRAL Model Law on Cross-Border Insolvency of 1997 and the consideration to weigh when a State is in the process of enacting it. The analyses of the Model Law could be broadened and deepened with a short analysis of some fifty USA and UK cases and a selection of the ever growing literature, mainly from sources in the USA and the UK.

The law is stated as per August 1, 2015. A comprehensive bibliography and a list of relevant websites is included.

This book (in English) also appears as Volume X in the (Dutch) series Wessels Insolventierecht.

Bob Wessels is Professor Emeritus of International Insolvency Law at the University of Leiden (The Netherlands). He held that chair from 2007-2014. He has been Professor of Commercial Law at the Vrije University Amsterdam from 1988-2008. He has over 40 years of experience as an independent legal counsel and arbitrator, provided expert evidence for cases in Belgium, Greece, Ireland, Poland, Sweden, Switzerland, UK and USA, and acted as consultant to the International Monetary Fund and the World Bank. From 1987-2016 he has been a Deputy Justice at the Court of Appeal (The Hague, The Netherlands). He is a Fellow of the American College of Bankruptcy, member of the American Law Institute and the European Law Institute, Honorary Member of INSOL Europe and Chairman of the Conference of European Restructuring and Insolvency Law (CERIL). Since 2010 he has been Expert Counsel to the European Commission in matters of restructuring and insolvency. Interviews Oude oplossingen populair in kredietcrisis naar aanleiding van het symposium 'De kredietcrisis: stand van zaken en wat staat er nog te gebeuren' van de Juridische PAO in Leiden.