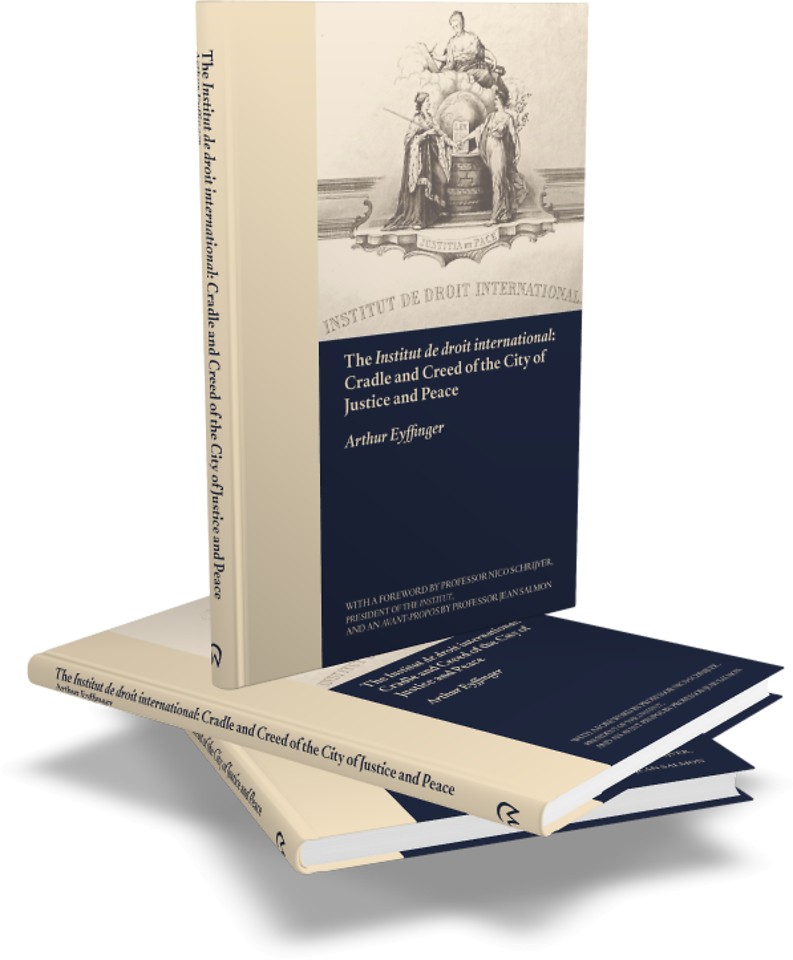 The Institut de droit international: Cradle and Creed of the City of Justice and Peace

With a Foreword by Professor Nico Schrijver, President of the Institut, and an Avant-Propos by Professor Jean Salmon

Already many years we perform researches with Arthur Eyffinger on the history of International Law with a special connection to The Hague in the Netherlands.

This year he published the book: The Institut de droit international: Cradle and Creed of the City of Justice and Peace. At this moment we are working on some projects related to Tobias Asser, the History of the International Court of Justice and some other interesting subjects. You will find more information on our website on these projects.

This books explains to you the complete history of the Institut de droit international (IDI). In the summer of 2019 a conference was organized by the IDI in The Hague and to celebrate this gathering Arthur Eyffinger published this very wonderful book.

The IDI, Tobias Asser, The Hague, the Peace Palace and Dr Arthur Eyffinger (legal historian, former head of the library of the International Court of Justice and author of various books on the history of international law) can be mentioned in just one breath given their various inextricable connections.

In 1873, the energetic and enthusiastic Tobias Asser served at a relatively young age as one of the founding fathers of the IDI when it was established in Ghent. Only two years later, it had its second meeting in The Hague in 1875.

Obviously, these were very formative years for the new institution. Its participants were all driven by the ambition to promote the international rule of law in all areas of international life, ranging from nationality issues and commercial law to issues of war and peace.

In 1898, shortly after the establishment of The Hague Conference of Private International Law in 1893 (another brainchild of Asser) and on the eve of the First Hague Peace Conference, the IDI met once again in The Hague. Its session had a major influence on the agenda-setting of this peace conference, not in the least because of the close co-operation and friendship between Asser and his colleague Friedrich Martens, Russia’s principal legal adviser. The IDI served as a cradle for several of the Hague Conventions as adopted in 1899 and 1907 (the Second Hague Peace Conference) as well as for the Permanent Court of Arbitration, as is so eloquently crafted by Eyffinger in the title of this book: The Institut de droit international: Cradle and Creed of the City of Peace and Justice. No doubt, all of these were among the reasons why the Nobel Peace Prize was awarded to, first, the IDI in 1904 and later to some of its members, including Louis Renault in 1910 and Tobias Asser in 1911.

The two subsequent meetings of the IDI in the Netherlands, in 1925 in The Hague and in 1957 in Amsterdam, have certainly added to this legacy in their own ways. In 1925, the IDI met in The Hague just a dozen years after the opening of the doors of the Peace Palace (coined by its benefactor Andrew Carnegie as The Temple of Justice) and only a few years after the establishment of the League of Nations and the Permanent Court of International Justice in the early 1920s upon the ashes of the First World War. The IDI’s membership was well represented in the Committee of Experts which prepared what would become the first ever World Codification Conference, held in The Hague in 1930 under the auspices of the League of Nations. Similarly, the IDI session in Amsterdam in 1957 took up issues of private and public international law which had got stuck in the dark years of the Cold War. This session was also timely given the holding of several path breaking multilateral conferences, including the First and Second UN Conference on the Law of the Sea in 1958 and 1960 respectively.

In the summer of 2019, the IDI was at last back in the Netherlands and in The Hague, having evolved into a truly global association during its past sixty years with membership from all continents. It is also striving towards more gender equality. In the midst of so many other learned bodies of international law as well as institutionalized intergovernmental expert groups, the IDI has faced admirably the challenge of continuing to serve as one of the most authoritative fora for the progressive development of international law and its gradual codification. And, notably, in the field of both private and public international law.

Reading Eyffinger’s works (see below for more publications), including this book, makes one realize that it is the Institute’s rich intellectual history and its particular personalities as well as its taking up of topics ahead of the curve which explain its continued prominent position in the field of international law, now for nearly 150 years.

The Institut de droit international: Cradle and Creed of the City of Justice and Peace