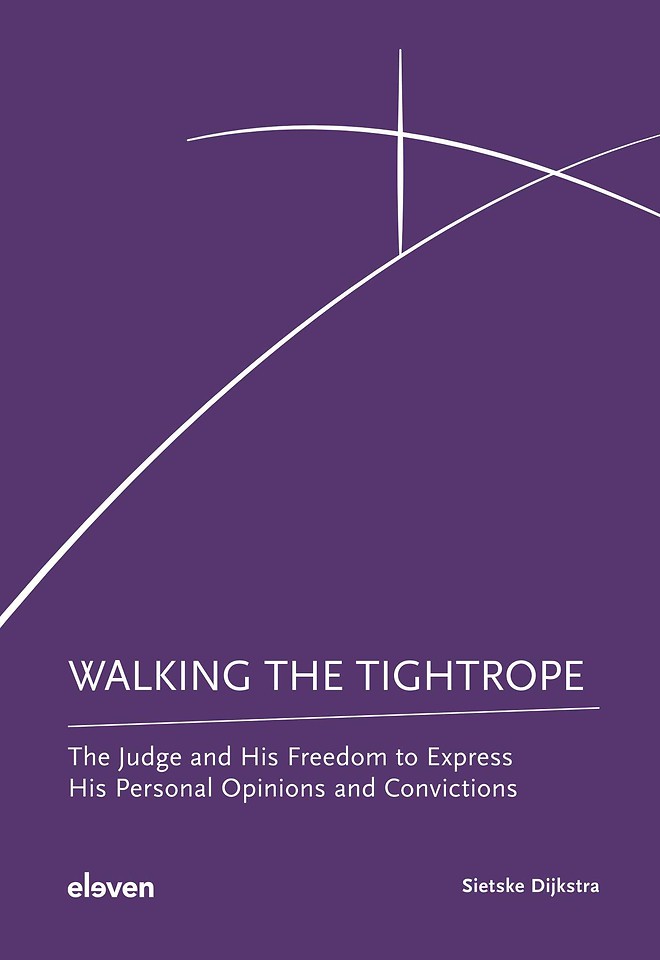 The judge is the holder of a state office in the rule of law. At the same time s/he is an individual with opinions, convictions and preferences. When the judge speaks, it may not always be clear to the outside world who is talking: the state or the individual. An opinion expressed by a judge may also rub off on the judicial office and, vice versa, the power and authority of the judicial office may reflect on the judge’s opinions, giving them special weight. It makes the judge’s speech into a complicated subject.

The democratic backsliding events in Europe, that have put pressure on judicial independence and individual freedom, have also made this a highly topical subject. Walking the Tightrope discusses the question where the limits of the freedom of the European judges lie to express their opinions. It includes a study of the case law of Article 10 of the European Convention of Human Rights, the soft law on the judiciary and judicial conduct, and a reflection from different ethical theories.

This multiperspective approach has resulted in a comprehensive discussion that challenges readers to form their own opinions on the subject. This book is meant for judges, public prosecutors, scientists, policymakers and others who are interested in the judge and his or her rights and ethics.

Sietske Dijkstra is a family court judge in Groningen, the Netherlands, where she presides over civil and family law cases. She wrote her PhD on the subject of freedom of the judge to express his opinions and convictions. Furthermore she regularly publishes on various subjects concerning judicial freedom and ethics.

3 International Soft Law 59
3.1 Introduction 59
3.2 United Nations Basic Principles on the Independence of the Judiciary 60
3.3 The 2019 Report of the United Nations Special Rapporteur on the Independence of Judges and Lawyers 61
3.4 Council of Europe: European Charter on the Statute for Judges 62
3.5 United Nations Bangalore Principles of Judicial Conduct 63
3.5.1 Value 1: Independence 63
3.5.2 Value 2: Impartiality 65
3.5.3 Value 3: Integrity 68
3.5.4 Value 4: Propriety 69
3.5.5 Value 5: Equality 72
3.5.6 Value 6: Competence and Diligence 72
3.6 European Network of Councils for the Judiciary: Working Group Judicial Ethics Report 2009-2010, Judicial Ethics: Principles, Values and Qualities 73
3.6.1 PART I: The Values/Merits 74
3.6.2 PART II: The Personal Qualities/Virtues 76
3.7 The ENCJ Sofia Declaration on Judicial Independence and Accountability 77
3.8 Recommendation CM/Rec (2010)12 of the Committee of Ministers of the Council of Europe to Member States on Judges: Independence, Efficiency and Responsibilities 78
3.9 The Venice Commission: Report on the Freedom of Expression of Judges 78
3.10 International Association of Judges’ Universal Charter of the Judge 79
3.11 United Nations Non-binding Guidelines on the Use of Social Media by Judges 79
3.12 Council of Europe’s Conseil Consultatif de Juges Européens: Opinions 81
3.12.1 Opinion No. 3: On the Principles and Rules Governing Judges’ Professional Conduct, in Particular Ethics, Incompatible Behaviour and Impartiality 82
3.12.2 Opinion No. 18: The Position of the Judiciary and Its Relation with the Other Powers of State in a Modern Democracy 83
3.12.3 Opinion No. 23: The Role of Associations of Judges in Supporting Judicial Independence 85